So, the name of the new Star Trek series has been revealed to be… Star Trek : Discovery. Or STD. The first Trek show to be named for Sexually Transmitted Diseases, I guess.

On the upside, one can hope that the name indicates that the new show will be more about exploration and discovery, and less about shooting and blowing things up. Time will tell!

Aside from the rather unfortunate name, we got our first new look at the USS Discovery, NCC-1031 herself. And holy Flying Spaghetti Monsters, that is one FUGLY ship. I know I really didn’t like the NX-01 design, but that looks like a masterpiece next to this thing. It’s apparently pretty heavily based on Ralph McQuarrie’s concept art for the Star Trek : Phase 2 series which we almost got before it morphed into Star Trek : The Motion Picture. 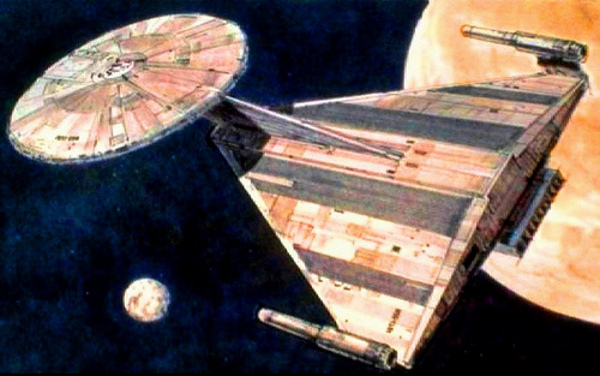 And folks, there’s a REASON that design was never accepted back then! It’s hideous! It’s absolutely the worst starship design I’ve ever seen in a professionally produced series. The first time I saw it, I honestly thought it was a fan design - partly because the design itself sucks so very badly, partly because the CGI of the clip looks like the kind of thing a fan might produce on his home computer. That last part is forgivable, I guess, if this is some kind of early test footage. Presumably the show itself will have decent CGI. Unless, of course, they’re making this show as an incredibly low budget thing.

For the design… all I can say is, given that it is early days, we can at least hope the design will be changed. Please change it, guys. Please. Please?

So in an interview, show runner Bryan Fuller has released some details of the upcoming Star Trek : Discovery. Here they are, along with my reactions.

* “Discovery” is another prequel, set in the Shatner (not JJ Abrams) universe ten years before Kirk and Spock’s famous five-year mission depicted in the 1960s TV series.

This is a cause for concern. Enterprise has already demonstrated that it's terribly easy to mess up a prequel series. Show runners naturally want to do their own thing, but there's no premise more constraining of that than a prequel series. This show is going to be limited from doing or showing anything that Kirk's Enterprise did or discovered first. As for example, they won't be able to show a Romulan, a cloaking device, a Gorn, etc.

* "Discovery's" lead character will be a human female. The female part has only happened once before, with “Star Trek: Voyager,” another series creator-showrunner Bryan Fuller helped write.

Okay. My reaction to this is essentially "meh". I don't care what gender or colour the lead character is, so long as he or she or it is a good character. I have to say, judging by how Janeway is written, there is the potential problem here that writers will always want to avoid showing a female character having any flaws or weaknesses, even when the situations show such flaws and weaknesses. But that's down to the writing.

* For the first time since the early episodes of “Deep Space Nine,” the lead character will not be a captain. When I asked creator-showrunner Bryan Fuller if he could describe the lead character’s rank, he replied “lieutenant commander.” A few minutes later though Fuller told me exclusively “she will hold many ranks.”

Hmm. Episodes like Lower Decks can work well, but a whole series based on that? Seems to me that one of two things are going to happen. Either you are going to have your main character be somebody who isn't actually solving the problems of the week... in which case, why do we care about her? Or, your main character IS going to be solving the problems of the week... in which case, what on Earth are the senior officers doing on this ship if they're so incompetent that they have to rely on a junior officer to solve everything? It's the exact syndrome that made Wesley Crusher so unlikeable! This does not bode well at all to me.

* The series will explore an incident mentioned in the 1960s series. (In the 1969 episode “Whom Gods Destroy,” there’s a reference to a war the Federation was fighting about 15 years earlier.)

I wonder if this isn't going to be the Axanar thing. That would certainly explain why they have taken the remarkable step of squashing fan films recently, given the planned fan Axanar movie.

* Fuller seemed to hint he would pursue Winona Ryder to reprise the role of Spock’s mother, Amanda Grayson. Hers would not be a regular role. When I asked if Grayson would appear in the first season of “Discovery,” Fuller smiled and replied “maybe.”

I'm fine with this. Spock's mom pre-dated the Kelvin timeline split, so she would be the same in both universes. Ryder is a fine actress, it would be perfectly fine to see her on the show in some capacity. But I'd be very wary of introducing other TOS characters. Don't make your universe seem so small that the same people keep cropping up all over the place!

* Shooting on the series is still months away and no one has been cast yet.

* The series will not be subject to broadcast standards and will feature “slightly more graphic content” than a typical Trek series.

Seems reasonable. I don't have any issue with a more adult Trek series. Starfleet officers are isolated from home for a long time and deal in death and disaster frequently, it's entirely appropriate that they would use adult language and have adult relationships with one another. I don't think I'd care to see "Star Trek : Game of Thrones" myself, though.

* The CBS All Access exec who introduced Fuller indicated that there will only be 13 episodes of “Discovery” per season, and certainly no more than 13 airing in 2017. Prior live-action seasons of Star Trek have typically run north of 20 episodes, often as many as 26.

IIRC they did this with The Next Generation as well, ordering an initial batch of half a dozen episodes or so - but then expanded it to a full season when those episodes did well. Perhaps something similar might happen? Either way, I'm fine with thirteen episodes or with more than thirteen.

* The infamous Kobayashi Maru incident (used to train Starfleet cadets) occurred prior to the events of “Discovery,” and will be referenced in the series.

Honestly, I think we've had enough of the Kobayashi Maru incident. Reference it in passing by all means, but do we need to see it or have discussion of it again? In Star Trek II it was a test Saavik took, and appeared to be simply one more test out of many the trainees took. Now it's almost become this mythical thing, with every character having some different way that they beat the test or at least tackled it in some imaginative way. Which defeats the whole point of it having this reputation as an un-winnable scenario and Kirk being the only person who ever beat it.

* Fuller confirmed Starfleet’s super-secret black-ops division Section 31 may be a component of the series. Discovery’s registry number is NCC-1031.

* Did you know every live-action season of "Star Trek" from 1966 to 2005 featured at least two time-travel episodes? And that five of the 14 Star Trek movies employ time travel? I asked Fuller if "Discovery" would feature time travel. He did not say "no."

I could very comfortably go without any more time travel in Star Trek. The above could be taken to mean "time travel is an integral part of Trek, so of course we'll be doing it", but honestly I read it as "time travel has been done to death in Trek already, let's have one show that doesn't even touch on it."

* Star Trek: Discovery will be set in the “Prime Universe” (so in the timeline of the original shows, not the J.J. Abrams reboot films), about a decade before Captain Kirk’s five-year mission. “We can redefine the visual style,” he said. “We get to play with all of the iconography of those ships and that universe. Since we are doing this series in 2016, and all of the other series have been produced [at a time that] isn’t as sophisticated as we are now with what we can do production-wise, we’re going to be reestablishing an entire look for the series — not only for the series, but for what we wanted to accomplish with Star Trek beyond this series.”

It is problematic to have a ship in what is essentially the TOS era that doesn't match the TOS styling even remotely. So for an example - ten years before TOS is about when "The Menagerie" flashbacks are set on Talos IV. So the Discovery crew should be wearing the same uniforms they had in that episode. Only... I'll bet you anything they don't. Why? Because "how it should be" isn't going to be as important to them as "it must look cool".

If they use broadly TOS styling but tweak it a bit, fair enough. I suspect they won't. Certainly their use of the USS Fugly indicates that they're just going to ignore TOS and do their own thing regardless, which is ominous.

And if they're going to change the look of species, as was done to the Romulans in TNG for example, then this is a misstep in my view. It's hard enough to explain why Romulans suddenly grew massive foreheads or why Klingons went from bumps to smooth to bumps again. Every time they do this, it just makes me wince.

Speaking of Klingons, here's a thought. Canonically, we know that Klingons have always had cranial ridges. But they lost these in season 5 of Enterprise, thanks to a virus that spread through the species. For the next hundred years they looked pretty much like Humans, until they got their ridges back during the period between the TOS series and movies.

Which means, if STD has Klingons in it, they have to be smooth headed Klingons.

So. Does anybody think the makers of this show will have enough respect for Trek continuity to actually do that? To use an "inferior" alien look, simply because the established events dictate that you must?

I'm betting not. What do you think?

* Will the Discovery look like the Enterprise? “Saucer section, the cells, and the design that we leaked early on has changed considerably. But it’s still very much inspired by those [Ralph McQuarrie] illustrations.”

This remains the single most depressing thing about the new series, and it bodes very badly for how it will go. "It will look like the McQuarrie ship" translates to "we don't care about the show's place in continuity" in my head.

I've been a Star Trek fan for over thirty five years. I'm enough of a fan that I've spent the time and effort to do... well, all *this* (waves around at DITL). If there's anybody in the world who should be bouncing with excitement at the idea of a new Star Trek series, it's me. But honestly, the above come across to me as somewhat sinister and ominous. I'm viewing the approach of this series with more than a tinge of dread... because deep down, I just can't shake the feeling that they're going to screw it up. Badly. Some of the above is positive, some of it is neutral, but a good deal of what I hear about this show indicates that they are making the exact same mistakes that were made with Enterprise, all over again.