The use of the Trilithium torpedo on the Amagosa sun by Doctor Tolian Soran represents one of the most awesome acts of destruction in known Trek history. There is little solid evidence concerning the operation of the trilithium torpedo, but some facts are known. Lieutenant Commander Worf reported that trilithium could cause all nuclear fusion to break down in a star; when the Amagosa star was destroyed, the following sequence of events occured :It was later revealed that the mass of the Amagosa star had altered sufficiently that it significantly affected the gravitational fields within the region. When the Veridian star was later destroyed, the shockwave produced had sufficient energy to shatter a habitable planet completely over a period of some seven seconds.

For the purposes of calculation, I will make the following assumptions :

When the shockwave produced by the destruction of the Veridian star reached Veridian III, the planet was completely destroyed over a period of approximately seven seconds. The rubble produced was moving at a rate approximately equal to one planetary diameter every five seconds - equating to 2,500,000 metres per second. The energy required to do this is given by :


So the total energy of the shockwave would be given by :

This represents the minimum energy output of the Amagosa and Veridian detonations - in fact it is perfectly possible that the energy release was considerably above this level, if the planet absorbed less than 100% of the energy incident upon it.

To produce an energy release of this magnitude some 4.73 x 1029 kg of matter must be converted completely to energy with 100% efficiency. This represents some 23.6% of the total mass of the star involved. 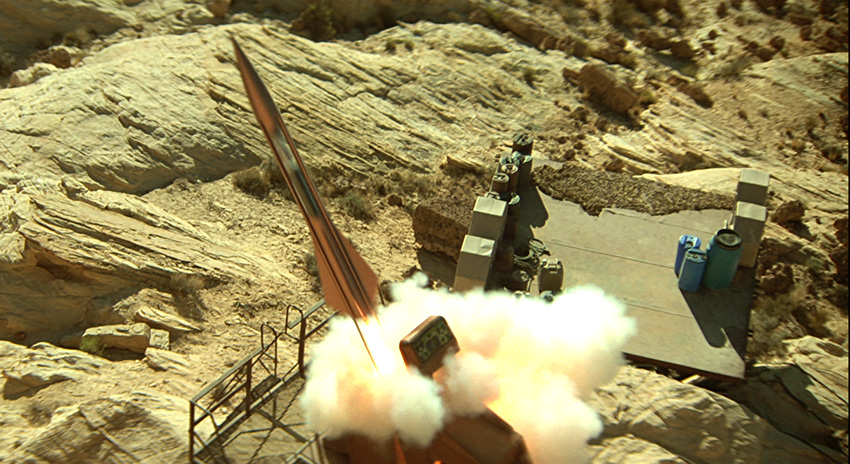 A trilithium missile firing from the surface of Veridian III. [1] 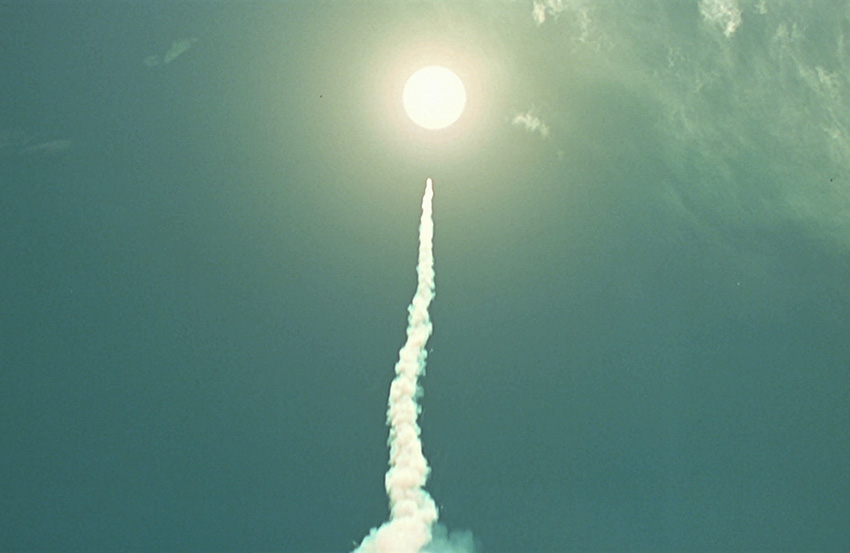 This image shows the weapon climbing through the atmosphere. Once clear it would go into warp to reach the sun as quickly as possible so as to reduce the chances of interception. [1]

This image shows the Amargosa collapsing as fusion breaks down. The major flare-up had already finished by this time. [1] 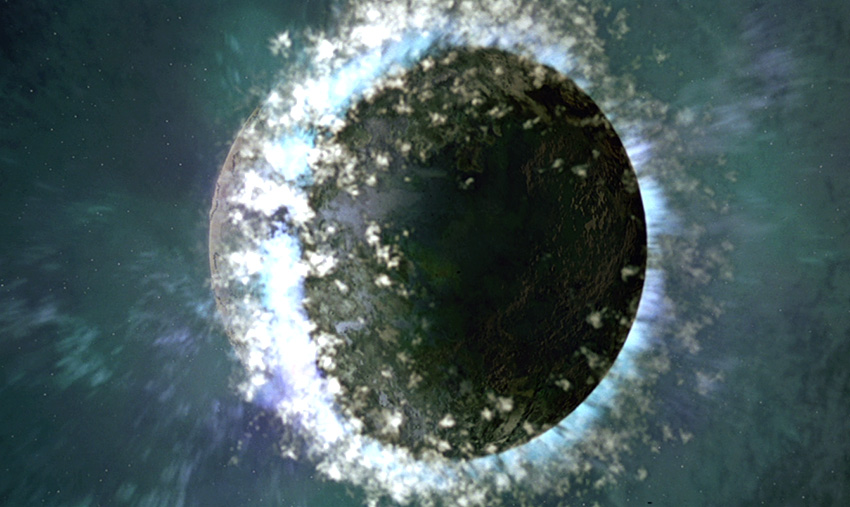 Veridian III as the shockwave hits it. The planet subsequently exploded over a period of several seconds. [1]

Shortly after the Amagosa detonation, Captain Picard and Lieutenant Commander Data spend some time analysing Dr. Sorans motives in the Stellar Cartography imaging room. During this analysis, Data explicitly states that the stars destruction has caused a significant change in the gravitational fields in the area. This fits in ideally with the loss of a significant percentage of the mass of the star, and is strong confirmation of the above calculations.

Some have suggested that the gravitational changes are due to a large amount of mass being blown off the surface of the star - that in fact this material comprised the shockwave which destroyed the planet. But this simply cannot be so - in the Viridian detonation Dr. Soran planned to alter the course of the Nexus so that it would take him off the planet. But the centre of gravity of a spherical shell lies at the centre point, so the course of the Nexus would only be significantly altered once it had passed through the shockwave... which would mean that the planet would have to be inside the shockwave... which would mean that Soran would be dead before the Nexus reached him. In order to alter the combined gravity field of the shockwave-star before it reached, the mass must have been significantly reduced in the initial implosion/explosion.

So far as I know, the use of the trilithium weapon against the Amargosa system is single largest destructive energy release in all of Star Trek history - possibly in all of science fiction history. Since the Trilithium warhead can be contained within what appeared - in the case of the Amagosa detonation - to be a standard Starfleet torpedo/probe casing, then it could presumably be used by any existing Starfleet ship. This would, for example, allow a Galaxy class starship to destroy some 250 solar systems without any form of replenishment. Indeed, if the ship where to stock its cargo bays with extra weapons then several thousand could easily be accomodated.