NOTE - The following calculations are based on a number of unproven assumptions concerning the operating principles of the Genesis device. In formulating these figures I tried to make the simplest possible interpretation of what we actually see the the Genesis device do during 'Star Trek II : The Wrath of Khan'. I tried to be as fair-minded as I possibly could, and I tried to make all assumptions err on the low side while still sticking to the basic idea. Even so, these calculations should be approached somewhat cautiously - especially as the conclusion is somewhat overwhelming!

While the Enterprise is on its way to Regula, Kirk, Spock and McCoy view a taped briefing by Dr. Carol Marcus, creator of the Genesis device. Dr. Marcus explains briefly the operation of the device - Genesis effect reorganizes matter on a subatomic level in order to convert dead matter such as lifeless planets into more useful forms. When the Genesis device is activated within the Mutara Nebula, Dr. David Marcus refers to the energy pattern as the 'Genesis wave'.

When the device detonates in the Mutara Nebula, we see the following sequence of events. 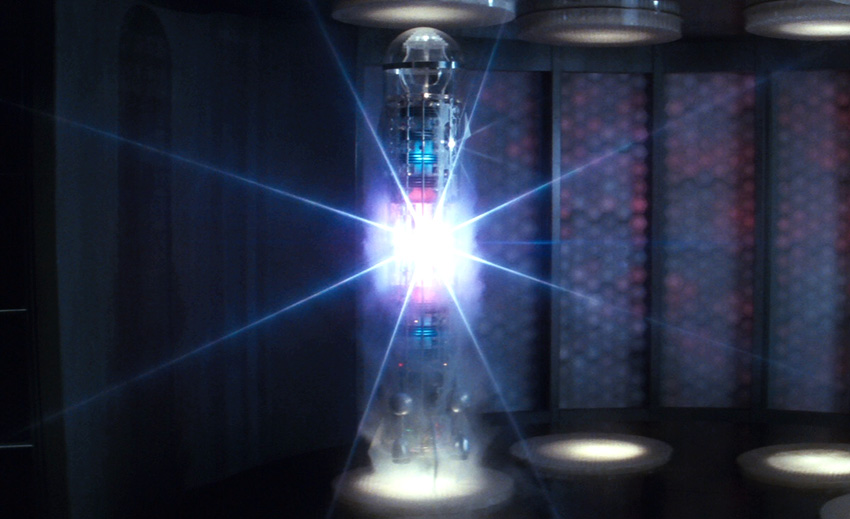 The Genesis Device, on a build-up to detonation. [1] 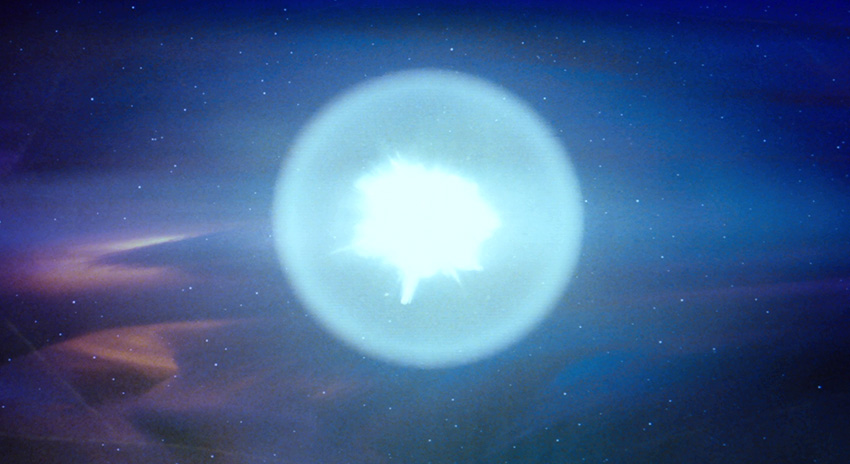 This image shows the initial energy wavefront spreading rapidly out through the nebula. [1]

Here we see the Enterprise heading out at warp speed as the shells form. You can see that the nebula material has vanished near to the centre, but is still visible on the right as the fifth shell begins to form.  [1] 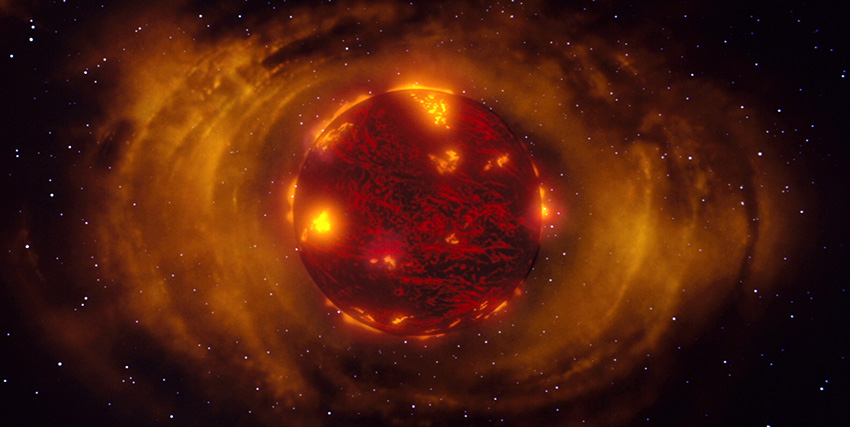 The Genesis planet, a few minutes after the initial detonation. The shell structure is still visible, although now compressed as it collapses inward. [1]

These observations lead me to conclude the following :

I am going to attempt to calculate the energy required to make the mass of a sun and planet collapse into a single point over the time frame we see.

The Enterprise most likely would go to its highest possible speed to escape the detonation, but in order to err on the low side I will assume that she did only warp one while heading out. The time between the detonation and the formation of the first five shells was 5 seconds; hence the fifth shell had a radius approximately equal to five light seconds.

Looking at scanned images of the first five shells reveals that the ratio of their radii is as follows :

Which roughly follows an exponential increase. Given that shell five has a radius of 5 light seconds, we can calculate each shells radius :


Following assumption 4, the nebula would have an average density of 1.7 x 10-19 Kgm-3. In order to collect enough matter for a star and planet, the Genesis device would need to clear a volume of some 1049 cubic metres, a radius of equal to 1.5 light years. This is sufficient to hold 28 shells in all. By calculating the volume which must be compressed into each shell, we can work out the mass of each shell. In order for the shells to collapse to the centre within the ten minute time frame, they must move at differing velocities. The following table shows the mass and velocity of each shell :

This makes it clear that the majority of the mass of the system - some 87% - was in fact contained within the outermost shell. For the sake of brevity I will confine myself to this shell only for the remainder of the calculations.

Shell 28 would have a collapse speed of some 70,000 times the speed of light. This equates to Warp 9.999648. We don't have an equation to tell us how much power is required to move a specific mass at a specific speed, but the 5 million ton Galaxy class starship requires a total of some 4.77 x 1018 Watts to move at Warp 9.6, or 1,909 x c. The power curve 'approaches infinity' as it reaches warp ten, and we have no clear idea of the figures beyond warp 9.6. But projecting the graph on page 55 of the Technical Manual to make an estimate - again erring on the low side - a figure of some 1025 Watts seems to be a reasonable value to maintain Warp 9.999+ in a Galaxy class ship.

Since shell 28 has a mass of some 2.82 x 1020 times greater than a Galaxy class vessel, it would need 2.84 x 1045 Watts to maintain this high a warp factor. Over ten minutes then, the total energy required can be calculated as :


So the total energy for all shells would (at a guess) approach 2 x 1048 Joules.

This energy is some 47 times greater than the energy released by the destruction of the Amargosa star. It is also more energy than is released by every sun in our galaxy put together over some 1,700 years.

This raises the question of where this energy comes from; one would need to convert some 1 x 1031 kg of matter, equal to some five solar masses, totally to energy in order to generate just enough to collapse the outermost shell! Obviously the matter-antimatter reactor is not sufficient for this. Genesis may use some form of Zero Point energy, although this seems a little unlikely given that this technology appears to have been invented during the TNG era. I guess you would have to invoke some form of technobabble process (probably involving subspace) to explain it.