The purpose of this article is to examine the phase cannon armament of the NX-01. I've examined every incidence of these weapons being used during seasons one to three, and although every incident is not pictured or described here, anything left out is simply weapons I've identified being fired again. Or at least, that's the intention. As usual, any errors or omissions are gratefully welcomed.

The phase cannon of Enterprise were first seen in the episode "Silent Enemy". When the NX-01 is faced with repeated attacks from a powerful alien vessel, it is revealed that the ship left spacedock before it was fully fitted out :


Shortly thereafter, Trip gives his engineering staff a pep talk about the weapons :


Annoyingly, the writers mixed up power and energy here; the Joule is a unit of energy (and the gigajoule is just a billion joules). Power is the rate at which energy is used, with one Watt being one joule per second. Trip should more properly have said that the maximum energy output of the weapon was 500 gigajoules, or that the maximum power output is 500 gigawatts. Trek writers mess this distinction up virtually every time they talk about energy or power. You'd think they would get it right at least half the time out of pure random chance!

Enterprise does tend to fire the phase cannon in short bursts, approximating one second, so if we're generous we could say that there's little difference in this case - 500 gigajoules of energy fired over one second would be a power of 500 gigawatts.

Incidentally, the description of the cannon as a "phase-modulated energy weapon" is a slightly different origin of the "phase" tag as compared to the "Phased energy rectification" which the TNG TM claims as the origin of "Phaser". You could take that to mean that the two weapons really aren't the same, despite appearances. Though of course the TNG TM isn't canon.

Anyway, the NX is therefore established very firmly to have three phase cannon. We see two of these firing several times in the episode. They are located in the forward ventral saucer, each one between a pair of torpedo tubes. 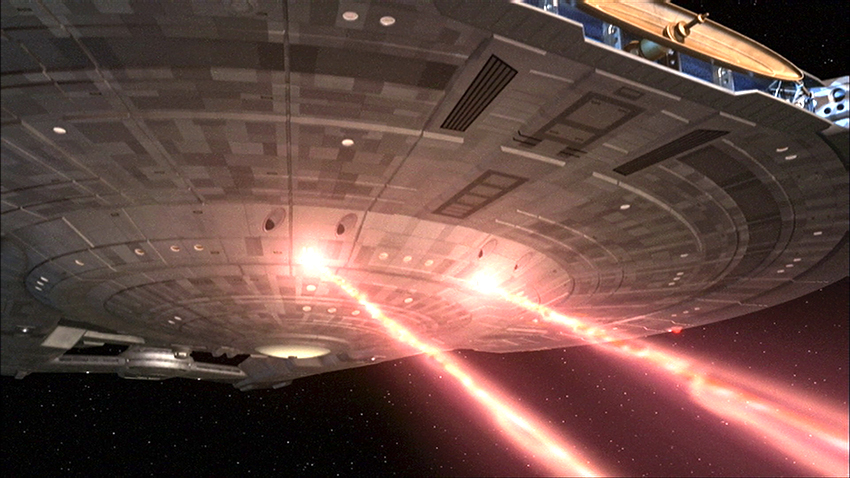 These are the most commonly seen cannon during early episodes of Enterprise. When first fired, Archer asks for "a little off the top" of a mountain test target. The cannon perform greatly above expectation but inflict considerable damage to the ship in the process, as we learn from Trip :


So the weapons put out 5,000 gigajoules (or gigawatts, depending) rather than 500. The damage inflicted on the ship would preclude the use of this overload in any but dire straights, but as it happens we see this problem resolved later in the episode. When the cannon prove unable to affect the enemy ship...


Although a concern is voiced that the structural integrity might not be up to that load the plan works perfectly. So apparently, Reed has found a way to increase the yield of the cannon tenfold whenever required. 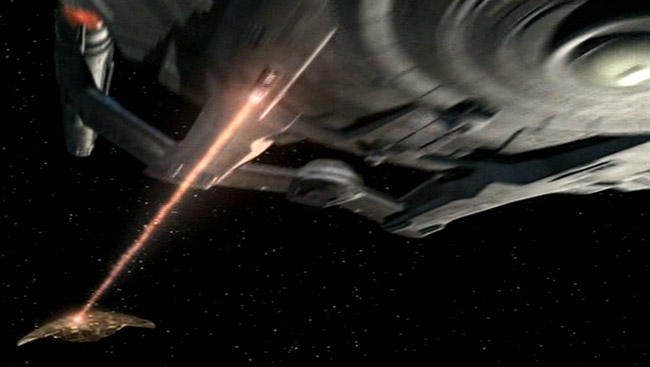 As you can see, the third cannon is located on the ventral surface of the starboard nacelle support strut. The placement is slightly odd in that it's asymmetrical - there's apparently no counterpart on the port strut. It also means that Enterprise can't fire phase cannons at anything above itself; her most powerful weapons are limited entirely to the downward hemisphere. We might chalk this up as just being more primitive implementation of weapons tech, but really - designers have been making stuff like this a priority since the early years of the 20th century! I suppose we might say that weapon placement wasn't a great priority, given that the NX class were meant to be all about exploration.

So there's the third cannon, our problems are solved... until "Shockwave Part 2". The Enterprise is escaping Suliban captivity and is engaged by a large number of the Suliban vessels. In returning fire, we see this : 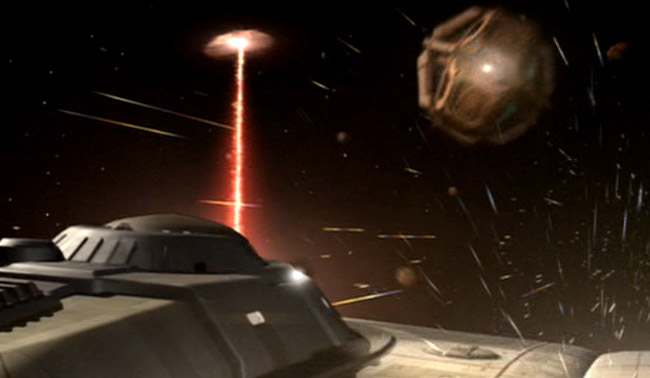 Followed moments later by this : 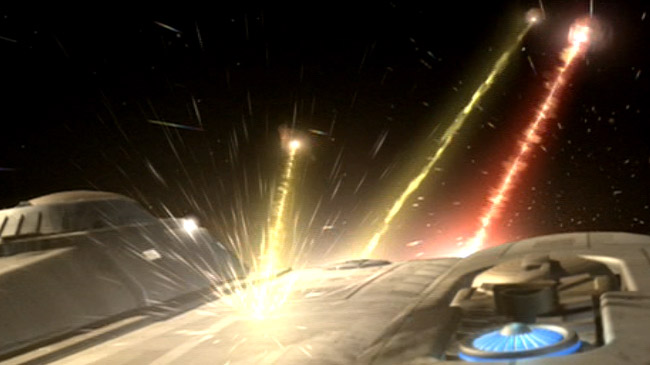 As you can see, these beams are very clearly emerging from the dorsal surface of the forward saucer, not the ventral surface.

One possibility is that the three cannon can actually fire from different spots on the ship. We know the forward two emerge from the ventral saucer surface normally, but perhaps they can rotate around and pop up out of the dorsal surface when required? This would handily address the field of fire issues mentioned earlier.

Barely do we get over that revelation when the same battle gives us this : 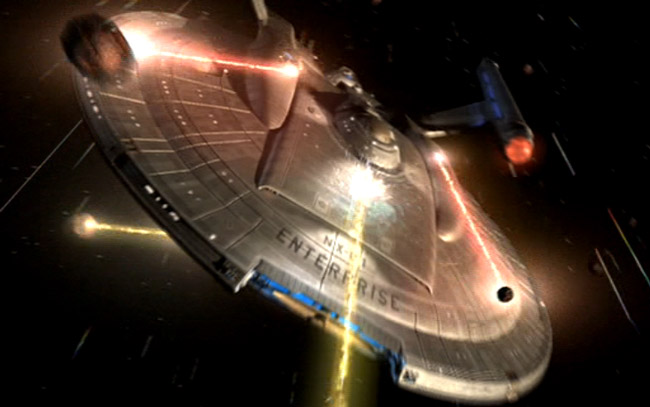 No less than two more phase cannon firing from the small features on the dorsal surface of the nacelle support struts! Then we get this : 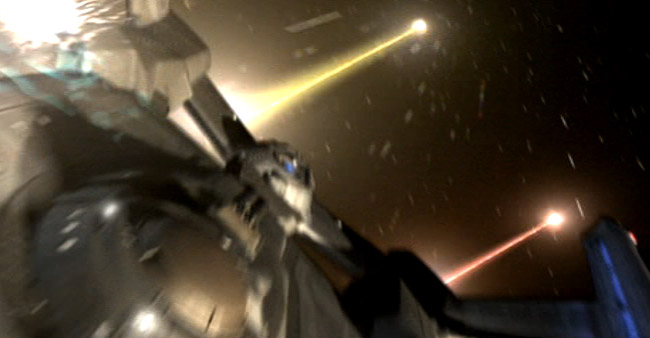 Yet another cannon, on the ventral surface of the port nacelle support strut this time.

This pretty much blows the idea of multiple ports for the three weapons out of the water. Whilst cannon that rotate and pop up a couple of decks to fire from the dorsal surface are just about believable, these shots would require at least one cannon to track through the entire saucer in order to pop out of the other strut. It's not terribly credible - why wouldn't you just put another cannon there and be done with it?

Once that theory is gone, we pretty much have to assume that the ship now has eight phase cannon. This isn't terribly hard to believe - according to "Silent Enemy" Trip and his staff managed to assemble one cannon and build two more virtually from scratch, and install all three, in a matter of 48 hours. He's had six months since then to build another five, and certainly Archer has had the motivation to bulk up on firepower.

We know from the dialogue that the ship was designed for only thee cannon. So the hull features on the dorsal struts were not originally intended as phase cannon ports. They have been claimed by Doug Drexler, the real-world designer of the NX class, as being the warp core output transfer junctions, one of the elements of the warp 5 engine which make it so superior to previous designs. So either Drexler is correct and the Trek-universe engineers of the ship put phase cannon in the middle of this highly important bit of engineering, or he's mistaken and this feature is some rather less vital bit of kit - some sort of pop-out sensor, perhaps - that Trip decided to replace with more cannon.

Of course we could chalk this up to simple FX gaffes. But in fact the makers of the show are quite consistent about these new weapons. For instance we see the ventral port nacelle strut cannon firing again in Future Tense :

Regeneration shows us what looks like the dorsal forward and strut cannon firing : 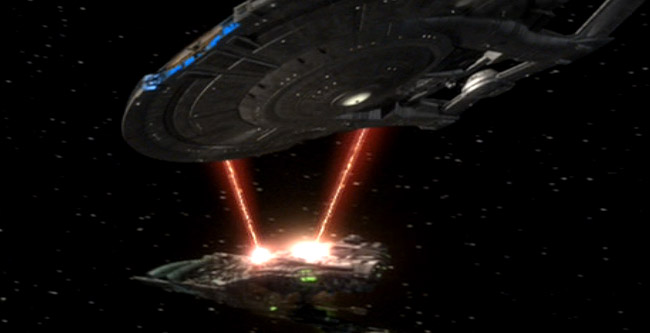 In this case it's hard to be really certain because we see it happen from a bad angle. To be honest the forward of the two beams looks like it's coming from yet another new location, but there's just enough uncertainty to say that those beams are emerging from the same general area as the Shockwave weapons. 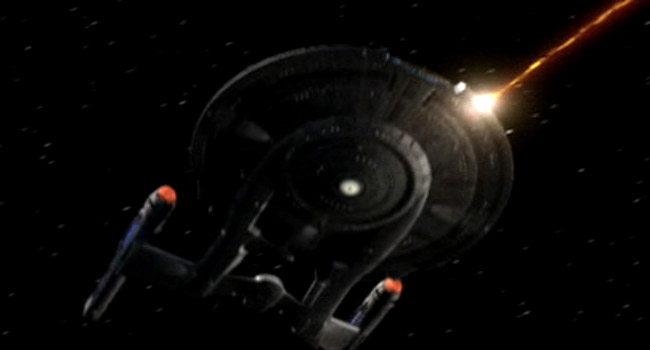 This looks like yet another new cannon, firing from the ventral surface of the saucer right near the edge. In fact this could be on the dorsal saucer surface; the bright light of the firing point may have just bled over a little. I'm tempted to go with that, especially given this shot from the same episode : 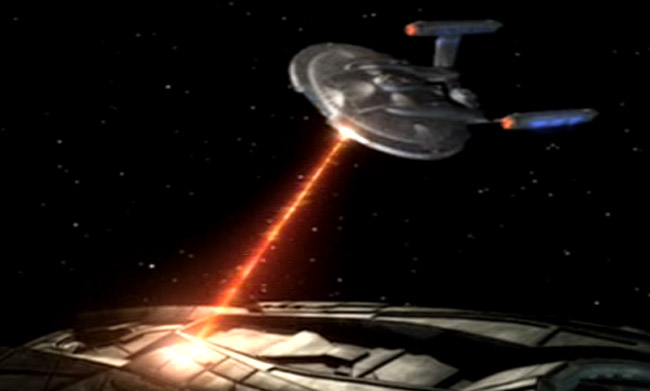 Again, a cannon firing from right on the edge of the saucer. Once again it could be on the dorsal or ventral surface, with a bit of light bleed over the edge, but it sure looks like it's on the dorsal - and since Shockwave Part 2 makes it clear that there are definitely cannon on the dorsal surface somewhere here, I'd go with that if I could. But then moments later : 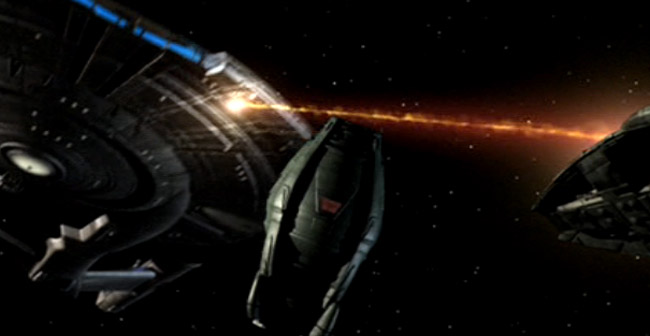 This one is indisputable - the beam clearly emerges from the ventral surface. So in addition to the dorsal cannon seen in Shockwave, we have at least one more.

For nine phase cannon in total. Meaning that the NX-01 has tripled her main armament since leaving spacedock. Indeed, if there is a starboard weapon on the leading edge of the saucer to match the port one then we're up to ten. But since we know the ship was originally designed to be asymmetric in weapon placement, I wouldn't make that assumption.

With the Xindi attack on Earth, Enterprise is recalled and refitted. She receives photonic torpedoes which are much superior to her old spatial torps - though interestingly she still retains the spatials on board. Although nothing is said about phase cannon, we will see that yet more of these weapons are added. First, in Rajiin : 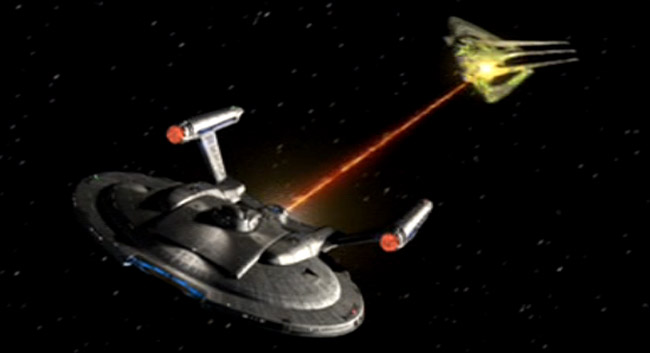 This beam is again originating from the ventral port saucer, but it's from a clearly different spot than any previous weapon. So that's eleven. Azati Prime then confirms one of the original three weapons : 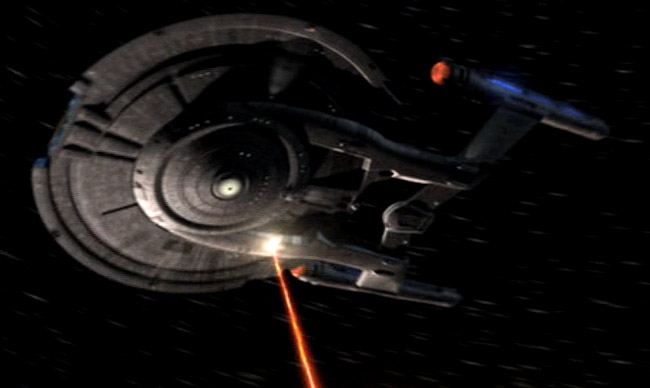 Whilst E2 again confirms the corresponding weapons on the dorsal port and starboard struts : 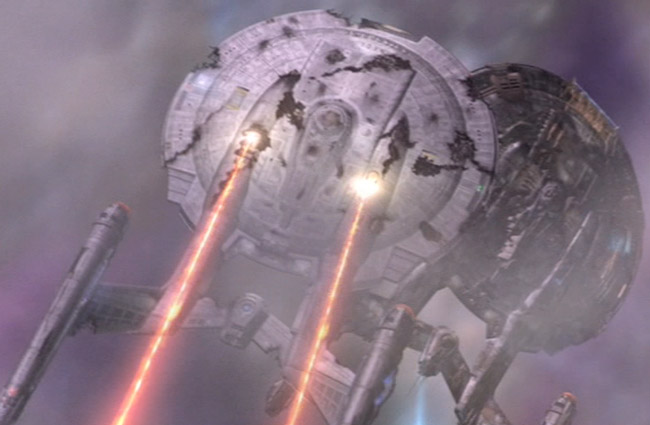 Again establishing that the creators are being quite consistent with their placement of these weapons and not just having beams emerge from random spots.

I said earlier I would not assume another cannon merely for symmetry. Fortunately this isn't necessary, as the episode "The Council" shows us the ventral port forward saucer weapon : 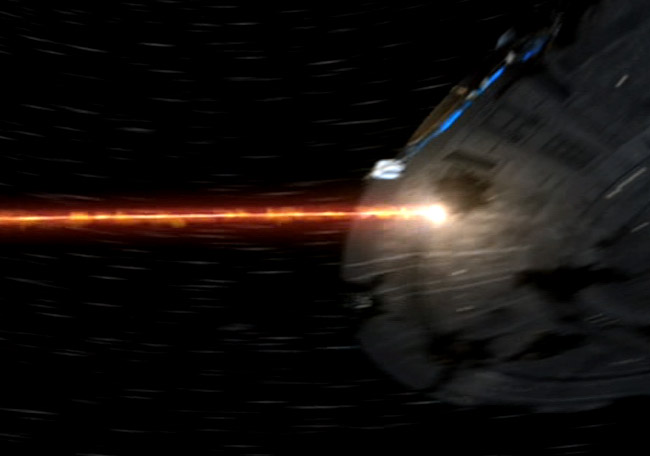 Bringing us to twelve. The episode "Countdown" hints at yet another cannon : 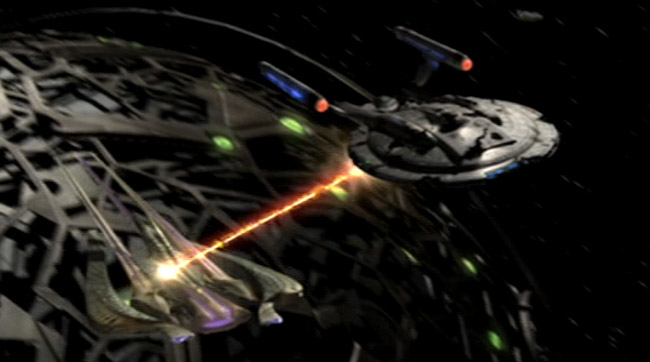 This looks like it's emerging from the ventral port edge of the saucer... but it's another shot from a bad angle, and it could also just possibly be the starboard ventral strut cannon firing in a way that the line of sight makes it look as if it's coming from somewhere else. So I don't tend to count this one as confirmed.

Into season 4 we finally get confirmation of the weapons seen firing in "Shockwave part 2" during the Vulcan war arc : 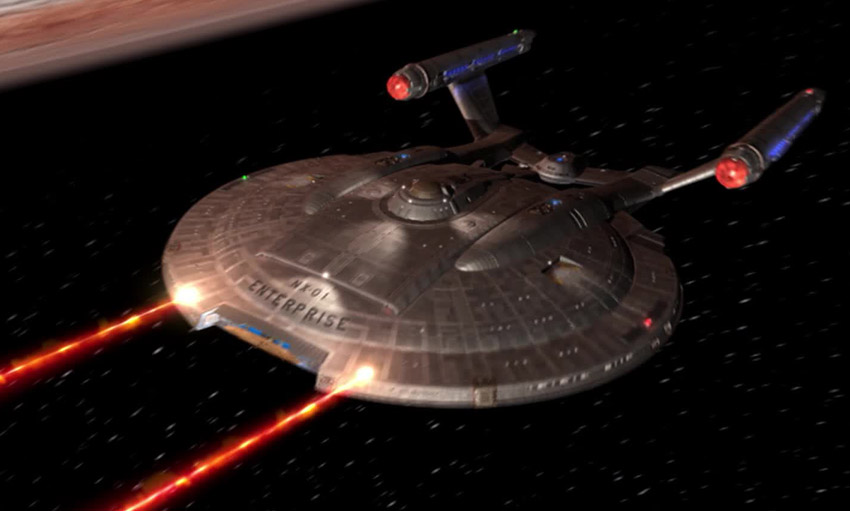 Here we can clearly see two phase cannon are located in this area. Other season 4 shots show that ports for the cannon have been added to the model, emphasising once again that this is no random glitch by enthusiastic FX guys but rather a planned addition to the ship.

So including the earlier set, we now have :

Bringing us to a total of twelve.

So the NX class have had four distinct phases of weaponry. First, she was launched before she was ready in a "not up to specs" condition. In the second phase, the addition of three cannon by Trip brought her back to specs - and then exceeded them as Reed came up with a way to increase the weapon yield tenfold.

The third phase saw Trip add another six cannon over the course of the next two years, greatly increasing firepower.

Finally, the ship was refitted with at least another three cannon added as well as photonic torpedoes.

If something like this had happened on a TOS or TNG era ship, it would be literally incredible - I'd just write it off as poor writing or special effects, in much the same way I write off the dozen different places we see phasers firing from on Kirk's Enterprise. But as the first real Starship built by Humans the NX is a pretty unique test bed - developing and implementing new systems is exactly the kind of thing we might expect from a ship like this. It's clearly established that building new phase cannon is something the ship's crew is up to - indeed one might almost say it proves to be much easier than expected, given how rapidly Trip does it. The cannon themselves are physically small - no larger than a person. Even if the supporting equipment is a hundred times the size of the weapon itself the ship certainly has room for quite a few of them to physically fit within the hull. 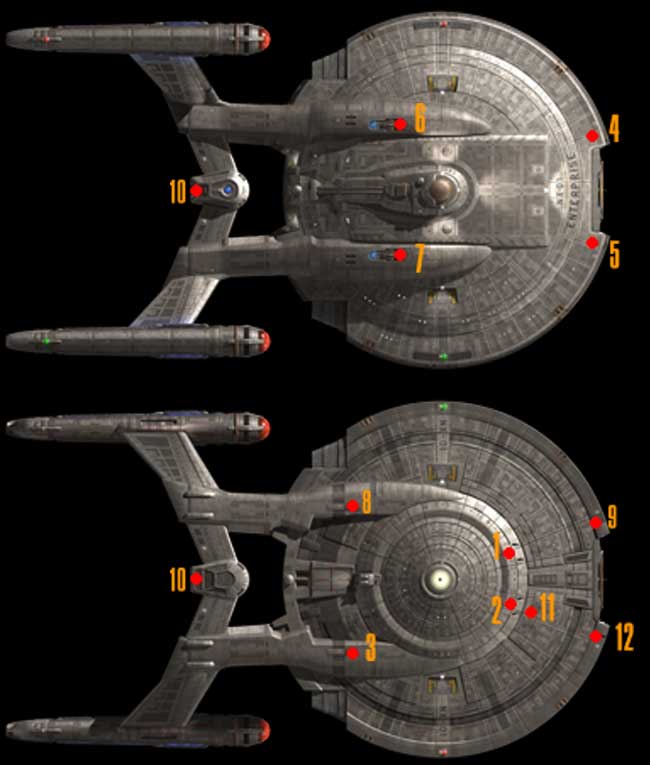