We've all seen the radars of old, which look something like this : 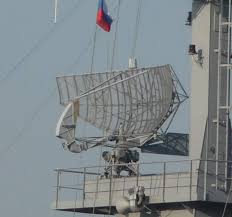 Big flat thing, usually on the top of a mast. Well the main active sensor on the Kororra class battleship is the EA-31, which is based on that look :

But times have apparently moved on, and the latest thing is the "integrated mast". This is a roughly pyramidal structure which has radar arrays and other sensors built into it. The main advantage of this is that 1) you can build the whole thing in a factory somewhere, put all the sensors and stuff together indoors, then ship the entire structure to the shipyard in one piece, bolt it down, plug all the wires in, and you've installed all your sensors in one go. And 2) much of the support equipment for those sensors is inside the pyramid, which has decks in it. Which means crewpersons can access all those systems for maintenance without any of that nasty climbing up masts in the middle of a winter storm.

So I've been playing around with replacing the big billboard sensor on the Kororra with the same concept. Not sure how I like it, though. Maybe I'm just used to how the old system. It certainly does allow for a much larger sensor in the old configuration.

Here's my take on both types:

I like the original looks-wise, but the integrated one seems the more logical. With the integrated one, a crewman could simply climb through and make any repairs necessary.
"No dictator, no invader can hold an imprisoned population by force of arms forever. There is no greater power in the universe than the need for freedom. Against that power, governments and tyrants and armies cannot stand."
Top

Spinners have the advantage of lower mass up high, so a waterborne ship is less likely to roll over. You also have greater access to all sides of the radar, vs trying to get at it inside a structure. Replacing it is a matter of just disconnecting the base and wires, and using a crane to lift it off.

Integrated has the advantage of keeping weather off the radar system, reducing wear and tear.

You also have the modern phased array radars that are steered electronically rather than physically, so the flat panels on the tower are the sensors themselves. Often they are placed right next to the CIC where the radar data is displayed and analyzed
Relativity Calculator
My Nomination for "MVAM Critic Award" (But can it be broken into 3 separate pieces?)
Top
Post Reply
4 posts • Page 1 of 1