Perhaps not the best of the movies adapted from Michael Crichton's books, but I still found it enjoyable. But then, I enjoy stories involving time travel. I understand Paramount interfered creatively, demanding cuts and re-cuts. I would be interested in seeing a director's cut with those scenes restored and Jerry Goldsmith's original score--one of his last.
"What has been done has been done and cannot be undone."--Ruth, All the Weyrs of Pern
"Dragons can't change who they are, and who would want them to? Dragons are powerful, amazing creatures."--Hiccup, Dragons: Riders of Berk
Top

Graham Kennedy wrote:You know, I'd really love to see a couple of the Brit Navy movies get a big buget remake. I'd love to see Battle of the River Plate and Sink the Bismark with proper quality CGI battles in them. I now it'll never happen - no audience for it - but man, that would be fun.

I'd watch those!
Where No Jedi Has Gone Before

Graham Kennedy wrote:You know, I'd really love to see a couple of the Brit Navy movies get a big buget remake. I'd love to see Battle of the River Plate and Sink the Bismark with proper quality CGI battles in them. I now it'll never happen - no audience for it - but man, that would be fun.

Sink the Bismark could be done. Alot of people are aware of the Bismark. Alot of them still think the Bismark as an near unsinkable ship.
"Don't underestimate the power of technobabble: the Federation can win anything﻿ with the sheer force of bullshit"
Top 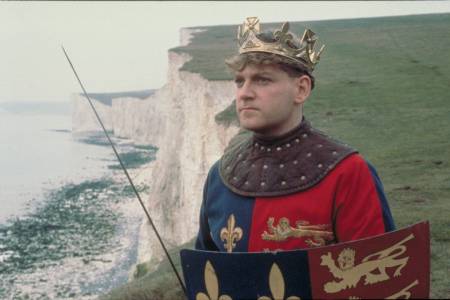 I rather enjoyed this one. The language isn't too inaccessible, indeed in a few lines here and there it's positively modern. Branagh does a good job, whilst BRIAN BLESSED steals every scene he's in. I especially his laying down the verbal smackdown on the French :
The way he calls the Dauphin "the Dolphin" is awesome, and his reply to "what to him from England?" - "Scorn, and defiance. Slight regard. Contempt." Such a great burn.

Perhaps not the best of the movies adapted from Michael Crichton's books, but I still found it enjoyable. But then, I enjoy stories involving time travel. I understand Paramount interfered creatively, demanding cuts and re-cuts. I would be interested in seeing a director's cut with those scenes restored and Jerry Goldsmith's original score--one of his last.

I read the book, never watched the movie. Good book though. “Quantum foam lets me roam”.

“Pull a stunt like this again and I’ll court marshal you... or promote you. Either way you’ll be in big trouble”
Top

Today I watched... Knives Out

So there's this rich family, except that they aren't rich - the patriarch of the family, a famous author, is rich whilst the rest basically sponge off of him. One day he's found dead in his room, his throat cut. Hence follows a murder mystery, with private dick Daniel Craig helping out the cops. The case is thrown into all the more turmoil when it's revealed that the guy's new will cuts off the entire family, leaving his fortune to his nurse.

Honestly don't see what all the fuss was about. To be clear, it's not a bad film. It's fairly smart, the characters are interesting enough and the acting is good all around. The plot twists and turns satisfactorily. But beyond that, it's just... okay. Even good. But after all the fuss I guess I was expecting something more.

This is among my favorite dragon movies, albeit lesser known, about a knight returning from the crusades, hoping to settle down. In return for a plot of land and a couple heads of cattle, he joins the search for a king's daughter, whom he finds protecting a dragon's egg. Great writing for the most part and great acting. I only wish the CG was as good. It does the job well enough, but it seemed at least 10 years behind what I would expect for 2004.

"What has been done has been done and cannot be undone."--Ruth, All the Weyrs of Pern
"Dragons can't change who they are, and who would want them to? Dragons are powerful, amazing creatures."--Hiccup, Dragons: Riders of Berk
Top

Thanks. I'll keep that in mind.
"What has been done has been done and cannot be undone."--Ruth, All the Weyrs of Pern
"Dragons can't change who they are, and who would want them to? Dragons are powerful, amazing creatures."--Hiccup, Dragons: Riders of Berk
Top

Not as good as I’ve heard, another “BANG! BOOM! Explosions!” Movie. Devoid of real story or character development. It has a few funny moments and the lead actress Brie Larson is spunky and sarcastic but almost too much. It’s like she took a page from Deadpool’s movie scripts and opted for an over-the-top of sarcasm and lack of seriousness in otherwise serious situations. It’s hard to feel a sense of impending doom of death when the lead hero makes wise cracks or extremely powerful energy bursts at random (which don’t seem to make any humans go, “what???!” And run away screaming) to make her not-so subtle points. It wasn’t horrible, it wasn’t great, it was meh.
“Pull a stunt like this again and I’ll court marshal you... or promote you. Either way you’ll be in big trouble”
Top

The 85 one is very of its time, but I don't mind that in a film. Basic premise, Charlie Brewster is a kid who loves vampire movies. One day some new neighbours move in, a couple of guys. Soon enough Charlie becomes convinced that the neighbour, Jerry Dandridge, is a Vampire. He's right of course, but nobody will believe him! Amazing! He ropes in Roddy McDowell, a B Movie actor who specialises in vampire-killing roles, to help. Together the three tackle the nasty Vampire and win through to victory.

The remake is also of its time, and the differences are interesting. In the original Charlie has a girlfriend who he is pressuring for sex - the joke being that as she finally acquiesces, he's too interested in his neighbour to notice. In the remake I guess they figured having the hero pester a girl for sex was icky, so they made her the one desperate for sex whilst he is resisting. But it's weird. I mean, they establish early on that he's the typical hormonal teenager who goes ga-ga over his sexy neighbour. And yet he has his gorgeous girlfriend (Imogen Poots) wanting the D, and he's not interested. Very odd.

The failed B Movie actor, Peter Vincent (From Peter Cushing and Vincent Price), is replaced with a very goth stage magic act with a vampire theme. This works okey and I like that idea that Vincent did know that vampires were real, he was just scared to deal with it.

A downside here, I'm afraid, is the vampire. Chris Sarandon's vamp is suave, nice, friendly, but with an air of subdued menace. He pulls it off extremely well. Colin Farrell's vampire just never pulls that off, doesn't really seem to be trying to. He's very intense, somewhat thuggish, and you can't imagine most people liking him the way they did Sarandon's vamp. Nor does he have the male helper, so we lose the homoerotic vibe to the bad guys. Another thing that they probably thought wouldn't work as well in the present.

Of course the vampire fights are way more overblown. Wooden stake machine pistols, people setting themselves on fire, CGI, you name it. It's fun enough, I guess.

Very little connection to the original 47 Metres down, apart from 'they both have sharks'. Basic premise is that there's an archeologist type guy working on an underwater Mayan city. His daughters and a couple of friends sneak off one weekend whilst he's working on a new entrance to the city, to explore the other end. But it turns out that a very aggressive bunch of sharks live in the city. With their entrance blocked the girls must try to get to the people woking with the dad - and so the chomping begins!

It's decent fun, it over the top. There's a fun moment that's a little let down by the fact that it's a super-direct ripoff of that scene in Deep Blue Sea. You know, that scene.

What put me off is actually the last ten minutes or so after they escape from the city. It was done, it was over... but nope. Must go even more over the top, even more ridiculous. It had me groaning, and not in a good way.

Today I watched... The Invisible Man.

This is a very different Invisible Man than most we've gotten. There are no scenes of a team working away on the magic formula, no scenes of a guy turning invisible, no government plot, no billion dollar company, none of it.

What this is actually about is an abusive relationship and how the abused party survives it. Elisabeth Moss is Cecilia Kass and Oliver Jackson-Cohen is Adrian Griffin. We meet then at 3:40 in the morning when Cecilia makes an 'escape attempt', managing to get away from her house and get picked up by her sister. She goes to hide out with childhood friend James and his teenage daughter. A few days later she learns that Adrian is dead, a suicide victim.

But strange things are happening. Cecilia keeps thinking there is somebody in the house - and eventually realises it for certain. Work vanishes from her portfolio before a job interview, a bottle of tablets she dropped during her escape turns up. Adrian is there, psychologically torturing her. But how can she possibly prove it when nobody will believe an invisible man can exist?

I won't spoil the ending except to say that as may be expected from this kind of film, Cecilia will feel more and more helpless and desperate, hit rock bottom, and then gradually start to come into her own ability to fight back.

The invisible stuff is done differently, too. Pretty standard would be for things to move subtly in the background, doors to creep open, etc. There's some of that, sure, but mostly Adrian's presence is done via camerawork - leaving space in the framing where he could be, so you're constantly wondering.

Not a big Brad Pitt fan, and I'm sure this film has a lot of departures from the source material--The Iliad by Homer. For one thing, Achilles dies during the fall of Troy in the film whereas his death, at least in The Odyssey, was supposed to have taken place before that, which is when Odysseus is inspired to build the horse. The whole timeline of the war seems to be off, too. Events that took place of the span of 10 years truncated down to a matter of weeks.

But, taken on its own, it's not a bad war movie. It presents a nice, balanced view between the Greeks and Trojans--neither side really "evil" other than a greedy Agamemnon, whom I would say is the real antagonist of the story. Great locations--Malta, Morocco, Baja California--with sweeping shots depicting ancient world armies clashing. It was nice to see Orlando Bloom with a bow again in the climatic battle. James Horner's score is excellent, too, as always.
"What has been done has been done and cannot be undone."--Ruth, All the Weyrs of Pern
"Dragons can't change who they are, and who would want them to? Dragons are powerful, amazing creatures."--Hiccup, Dragons: Riders of Berk
Top

How can that even be possible. He's either invisible or you can watch him. It's can't be both.